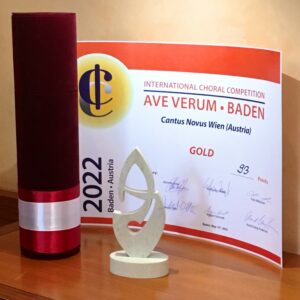 For the first time, Cantus Novus Wien participated in an international choral competition on the weekend May 13 – 15, 2022. Cantus Novus Wien competed with renowned choirs from Czech Republic, Ukraine, Sweden, Slovenia, Estonia and Switzerland at this year’s International Ave Verum Choir Competition IAVCC. The venues: the ballroom of the Baden Casino and St. Stephen’s Church, which was also the venue of the Long Night of Choral Music. The latter was livestreamed on Facebook. A recording is available to watch on Facebook (from 1:02:00).

Cantus Novus Wien successfully passed the compulsory program part A, which had to contain music pieces from before 1945, between 1945 and 2000, after 2000 and a unison compulsory song. The latter was a musical interpretation of an old testament bible verse, “Be Not Afraid”, by Austrian composer Franz M. Herzog who dedicated the piece to the victims of Covid-19.

Our success on Saturday meant we could compete against four other choirs in Sunday’s “Grand Prix”. For our intepretations, we were rewarded 93 of 100 points and a “Gold” title, according to an international scale ranging from Bronze to Superior Gold.

Cantus Novus Wien is grateful for its recognition!

The International Ave Verum Choral Competition is a biannual event in Baden bei Wien. Eight choirs from all over Europe last competed between 13 and 15 May. The city is not only a renowned and UNESCO protected Spa town, but an important historical junction of a diverse set of artists. Mozart, Beethoven, Strauß, Zierer, Lehár, Reinhardt, Schnitzler, Rainer, to name a few. The Choral Competition was initiated by composer and conductor Wolfgang Ziegler and each year attracts a high level international jury.

Cantus Novus Wien, based at the Vienna Diocesan Conservatory for Church Music, has been directed by Thomas Holmes since 2001. In 2018, it was named “Choir of the Year” by the Vienna Choir Forum for its outstanding choral work. Cantus Novus Wien regularly showcases its broad stylistic range: at the international film music gala “Hollywood in Vienna” 2019, the consecration of the new organ at St. Stephen’s cathedral in Vienna in 2020 or in the ambitious video productions.

The choir’s repertoire includes oratorios, among others, by Handel (Israel in Egypt; Messiah) and Haydn (The Creation) as well as the Requiem settings by Mozart, Brahms, Verdi and Fauré. With contemporary music as one of the focal points, the choir premiered works by Wolfgang Sauseng, Ruth McGuire, Wolfgang Reisinger, Markus Pfandler, Wolfram Wagner and Annamaria Kowalsky.